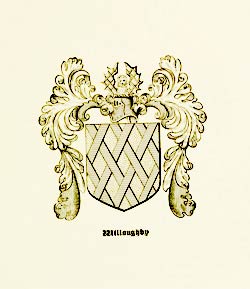 Through the marriage of Nathaniel and Susanna Willoughby Lynde, the Willoughbys of Boston are an important part of the story of Cypress Cemetery. Nathaniel and Susanna’s fathers, Judge Simon Lynde and Deputy Governor Francis Willoughby, were both influential and wealthy men in Boston. They both conducted their social and public lives at the same time and were of the same rank, so it is thought that they most likely knew each other. Simon Lynde and Francis Willoughby were, however, thought to be opposites in their support of King Charles I of England. From records it appeared that Lynde was “ready to maintain the King’s prerogative while Willoughby and his father were part of the government that deposed and beheaded the King.” Unfortunately, only Simon Lynde lived to see the marriage of the Nathaniel and Susanna as Willoughby had passed away by the time of their marriage in 1683. 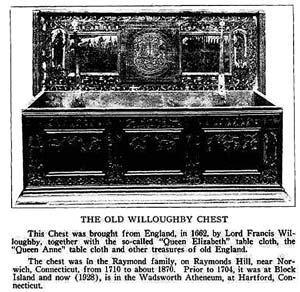 Captain Willoughby came to Charlestown, Massachusetts in 1638 with his first wife Mary and three year old son Jonathan (who at one time was a preacher in Haddam, Connecticut in 1664 and 1665). Upon the death of Mary only three years after their arrival in Massachusetts, he returned to England and eventually married his second wife, Sarah (Mary’s sister). Following several years of marriage and the birth of several children, Sarah passed away in 1653 following her return to England with the children. The three were left to the care of their father. In 1663, records show that merchant Francis Willoughby returned to New England with his third wife, Margaret Locke Taylor, whom he married around 1658. It was during the period from 1665 through 1670 that Willoughby was chosen as Deputy-Governor of the Massacusetts Bay colony. Shortly thereafter, the infirm Willoughby passed away on April 3, 1671. Although his birth date and his age were unknown, it was thought that he died at the age of about 58 years.

Susanna Willoughby Lynde’s mother, Margaret (Locke) Taylor, was the Deputy Governor’s third wife; Margaret and Francis had the last of Willoughby’s children, including Francis (who died at approximate age 18 of small pox), Nathaniel (their own Nathaniel) and Susanna. Records indicate that Francis Willoughby loved third wife Margaret very much, trying to shield her from his “wayward” son by his first marriage – Jonathan. Willoughby also left half of his substantial estate to Margaret. That estate, in turn, was inherited by Margaret’s children, including Susanna. It was this substantial inheritance that Susanna brought to the marriage with Nathaniel Lynde. Susanna Willoughby Lynde was the ninth of nine children fathered by Francis Willoughby in his three marriages (a tenth child was born after Susanna in 1670, possibly still-born – in Willoughby’s will and testament he refers to the fact that his wife Margaret may be “with child”).

Although much is known about the Lynde family as a result of the care taken by Nathaniel Lynde’s brother Benjamin’s geneaological efforts, most of the history and “relics” of the Willoughbys had been lost through time. What has been retained can be traced to Nathaniel and Susanna’s eighth child, daughter Sarah Lynde and her niece, Hannah Griswold (daughter of Susanna’s sister Hannah). Although there were many “relics” of the Lyndes and Willoughbys – bibles, jewelry, silver and other precious material goods – most have passed out of existence. One piece that is known to exist is what is referred to as the “Old Willoughby Chest” (photo above right). It is described as a large, massive and richly carved in which Sarah brought her choicest possessions. The chest is described to be 6 feet 5 inches in length, width 2 feet 2 1/2 inches and depth 2 feet 3 inches with a top of two inches in depth. The wood is described as “odorless”; the chest has large wrought iron handles on both ends secured by bolts. The hinges are also wrought iron and bolted and extend nearly across the cover. A wrought iron lock is also present. The chest is carved on the front and also on the inside of the lid, but the outside carving is fairly worn.

Given the fact that much of the “relics” of the Lyndes and Willoughbys have been lost (through the years, silver is often melted down in order to make other things), the fact that the chest is still in existence is if historical significance. As described, the chest came with Susanna to her marriage with Nathaniel. When daughter Sarah married Joshua Raymond of Montville, she took the chest with her. An elderly Sarah was described as enjoying opening the chest and telling the stories of the contents to her grandchildren. Eventually, the chest found its way to the Wadsworth Atheneum in Hartford where it presently sits in storage. Special arrangements are being made to view and photograph the Willoughby Chest to include in this historical account of the Lynde and Willoughby family.