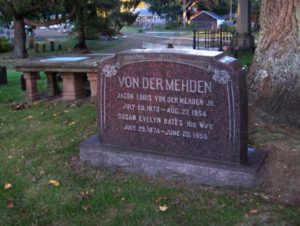 Interesting stories surrounding those who are buried in Cypress Cemetery don’t only go back to the colony’s earliest days. An example: Louis and Susan von der Mehden weren’t original settlers in the Saybrook Colony nor were hey even born in Connecticut. They found their way to Old Saybrook in the early 1900’s and eventually lived here full time until the end of their days. Their many accomplishments include having a recital hall named in honor of Louis at the campus of the University of Connecticut in Storrs (photo below right), a result of a $500,000 gift to the University by Louis’ widow Susan von der Mehden. Today, that level of donation would be considered significant, but in the mid-1950’s, it was huge. Unfortunately, although Louis von der Mehden’s name will live on via von der Mehden Hall at the University of Connecticut, Louis and Susan’s story, and the stories of others buried at Cypress, are at risk of slipping away. The name becomes only an engraving on a cemetery tombstone. The von der Mehdens would certainly be proud of the legacy that they’ve left behind for the music program at the University of Connecticut. 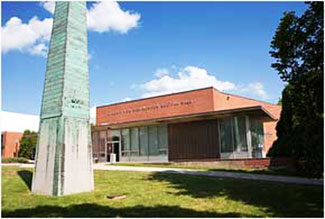 As a musician, Louis von der Mehden led bands at the Presidio and was first cellist with the San Francisco orchestra for eight years. After the 1906 San Francisco earthquake, his family moved to New York City where Louis was steadily employed as a cellist or conductor with theatrical or commercial bands. Through his life he also composed, arranged and orchestrated the music of others. In the early 1900’s he was working full time in recording with well known companies including Columbia, Lyraphone and the Victor Talking Machine Company, either playing cello or conducting. Click the Victor record label below to hear “Through the Panamal Canal”, one of numerous J. Louis von der Mehden compositions filed in the U.S. Library of Congress.

In 1911, the von der Mehdens purchased property on Essex Road in Old Saybrook, Connecticut, where they built a house. Until 1926, they retained their apartment in New York City, where Susan was a representative at a toy manufacturing company, and the house in Connecticut. Susan’s position was terminated in 1925 and they moved permanently to Old Saybrook. When Louis and Susan finally retired to Old Saybrook, Louis continued his music by teaching private music lessons to local residents and playing the piano himself. They spent much of their time gardening, their passion. Louis was also active in the local Republican party.