The Lyndes of London and Saybrook, via Boston 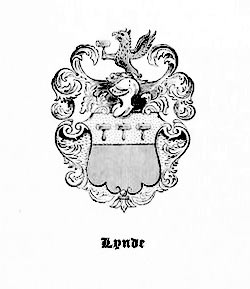 There is much information to be found in historical records on the family of Nathaniel Lynde. Records go back at least as far as his paternal grandfather, Enoch Lynd, and before with more found in what are known as the Lynde “Diaries”. As of 1892, a Mrs. Susan S.Chalker of Saybrook – descended from Nathaniel’s youngest son Joseph – owned one such copy. Another copy was owned by Mr. Samuel A. Lynde of Chester, who descended from Nathaniel’s oldest son Judge Samuel Lynde. The primary historian in the Lynde family was Nathaniel’s younger brother Benjamin Lynde and, after his death, his son Benjamin. Of note, both Benjamins attained the position of Chief Justice of the Superior Bench of the Province in Massachusetts and were considered very influential in the jurisprudence of that state.

Enoch lived and died in England while Simon was born in England, came to Boston in 1650 and died in 1687 at age 63 years. Nathaniel was born in Boston in 1659 and died in Saybrook 70 years later in 1729. Through his life Simon was considered a “person of prominence”, “possessed of a large estate”. Amongst the possessions in his estate were substantial land holdings in Massachusetts, Rhode Island and in Saybrook, Connecticut, land that was originally owned by Colonel George Fenwick in the Saybrook Colony. Simon purchased the Saybrook land through Fenwick’s sister, Elizabeth Cullick, who possessed the land following Fenwick’s return to England after the death of his wife Lady Alice Fenwick in 1645.

Nathaniel Lynde, Simon’s third son, apprenticed with his father in Boston as a merchant. While in Boston he married Susanna Willoughby in 1683. Susanna was the only daughter of Governor Francis Willoughby of Charlestown, MA. After the marriage, Nathaniel and Susanna moved to Saybrook where they came into possission of “several hundred acres of land” that included “housing, barn buildings, orchards, fences, woods, underwoods, lats, etc.”, the Fenwick land deeded to them by Simon. The land included what is now known as Lynde Point (the Borough of Fenwick), much of the land between Lynde Point and Cornfield Point as well as Tomb Hill where Lady Fenwick was buried prior to her reinterment in Cypress cemetery. On Saybrook Point, Nathaniel and Susanna also took possession of 13 acres of land, located at the corner of Willard Avenue and including the Annex section of Cypress Cemetery (highlighted in red below). It was this property that included the “housing, barn buildings and orchards”. The side-by-side burial tablets are those of Susanna – who died in 1709 at age 45 years – and Nathaniel (left and right, respectively).  You can read a description of how the Lyndes obtained possession of the original Fenwick land here. 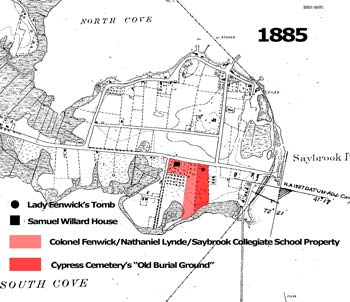 Between 1689 and 1721 Nathaniel held many offices, one of which was his appointment to Treasurer of the fledgling Saybrook Collegiate School in 1701. He was quoted as saying that he “…was pleased generously to give a House and Land for the use of the Collegiate School, so long as it should be continued at Saybrook.” This attests to his reputation as an “educated gentleman of high character and large public spirit, and devoutly religious.” The Annals of History of Yale College indicate that the the land deeded to the Trustees of the Collegiate School included a dwelling house and lot in Saybrook containing about two acres, fifty-eight rods, with upland and meadow adjoining the house lot. The land was deeded “…for the liberal education of youth that by God’s blessing may be fit for publick service.” The house described is thought to have been located on the corner of Willard Avenue and College Street; the Samuel Willard home now rests upon what was thought to be the foundation of the Lynde home.

Nathaniel and Susanna had ten children – four sons and six daughters. The eldest living child (their first child, Susanna, died in infancy), Samuel (named after Nathaniel’s eldest brother), attended and graduated from the Saybrook Collegiate School and, afterwards, from Yale. Samuel held many of the offices held by Nathaniel, including being Justice of the Quorum and a Judge for the County Court for New London County. For the last two years of his life he was Judge of Superior Court. Samuel died in 1754 at the age of 65 years and is buried in Cypress with his grave marked by a tablet similar to that of his mother and father. The photo at right shows Samuel’s tablet in the foreground with the tablets of his mother and father in the background at the base of the tulip tree. The plaque bearing his name is shown below. All of the stones seen in the photo above are those of Lynde family members.

Nathaniel and Susanna’s other eight children included Nathaniel, Elizabeth, Willoughby, Hannah, Susannah, Sarah, Joseph and Ann. Interestingly, given that mortality rates of the young were high, all but two of the children lived long enough to marry and have children of their own. Only Nathaniel and Susanna’s first and fourth children, Susanna and Willoughby, died in childhood. Susanna died at 4 1/2 months (hers is the oldest marker in Cypress) while Willoughby died at age 7 years. In the photo above, Willoughby’s small stone can be seen at the base of a larger stone just to the right rear of Samuel’s tablet, located just inches from the larger stone.

Within the “ancient burial ground” of Cypress Cemetery, one can find the burial plots of six generations of Lyndes, starting with Nathaniel, born in 1659 and extending through Adelaide Lynde, born in 1837.