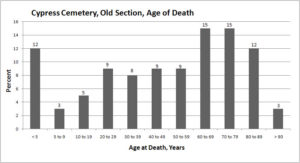 Using statistics for the age of death of those buried in the old section of Cypress Cemetery, one would likely expect to see a trend of generally younger age at death than today. The chart shown here indicates that through the time that people were buried in the old section (late 1600’s through the early 1900’s), on average, the range of ages at death is a lot higher than might be expected, with approximately 40% living beyond the age of 70. It might also be said that, where almost half live beyond the age of 60, over half die before what is today a relatively young age.