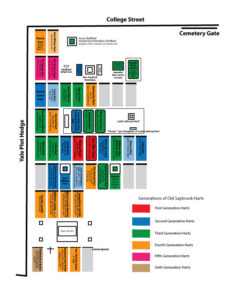 The Hart Plot adjacent to the Yale Boulder lot in the front of the cemetery is the largest family plot in Cypress.  The map at left shows more than five generations of the Harts buried in Cypress starting with Hart patriarch Reverend William Hart and his wife Mary Blague (red plots, center of family plot).  The last Hart that lived in Old Saybrook is Elizabeth Hart Bailey who died in 1977 (tan plot, lower left of family plot).

Reverend Hart was a fourth generation Hart in America. His great grandfather Stephen immigrated to Braintree, Massachusetts from Braintree in England in 1632.  It was Stephen Hart and a number of other “adventurers” that made their way overland from the Massachusetts Bay Colony to discover and settle the first Connecticut Colony in the Windsor/Hartford/Wethersfield area.  It was Stephen’s grandson John Hart that moved to Saybrook after attending Harvard College for a few years.  John has the distinction of becoming the first to receive a Bachelor of Art degree from the fledgling Saybrook Collegiate School in 1703.  Reverend William Hart followed his father by graduating from Yale in New Haven (after the collegiate school moved from Saybrook Point in 1717) in 1732.  Four years later, he was called to follow Reverend Azariah Mather as the pastor of the First Church of Christ in Saybrook.

The Hart family is likely the most notable family that lived in Old Saybrook. Many of the town’s historic buildings that were built by some of them as well, like the General William Hart House that serves as the home of the Old Saybrook Historical Society, and the Samuel Hart House located at the intersection of Main Street and Maple Avenue, the Samuel Hart Jr. house mentioned above, and the Grace Episcopal Church, which was built with the financial support of Squire Richard Hart, General William Hart’s son. There were numerous other homes built by the Harts on Main Street that were torn down as time passed. Much could be written about the Hart clan, but for brevity sake, here’s a short “Hart” primer.

The Hart patriarch was Reverend William Hart. He was the fourth generation Hart to live in America – his Great Grandfather Stephen Hart immigrated to Braintree, Massachusetts from Braintree, England.  His father, John Hart, had the distinction of receiving the first Bachelor of Art degree from the fledgling Saybrook Collegiate School on Saybrook Point in 1703.  Twenty nine years later, in 1732, his son William Hart received his degree from Yale in New Haven after the collegiate school left Saybrook for that city in 1717.  The pastorate of Reverend Hart and his successor (and son in law) Reverend Frederick Hotchkiss, together, spanned over 108 years of service to the Congregational Church and community. Reverend Hart and his wife Mary Blague lived in a house on Main Street that was torn down in the 1930s to make way for Old Saybrook’s Catholic Church on Main Street.  The Harts had nine children including oldest son General William Hart, next youngest Samuel Hart and youngest son Elisha Hart. Oldest daughter Sarah Hart Jarvis – said to be a “free spirit and quite opinionated woman” – was divorced from her preacher husband, an unusual occurrence in those days. Another son, Joseph Hart, was an influential merchant and business man who got caught up in a significant financial scandal. After leaving Old Saybrook, he met his demise falling overboard from a ship while at sea. Youngest daughter, Amelia, was married to the aforementioned Reverend Hotchkiss.  With the exception of Ann Hart (who married Commodore Isaac Hull and was buried with him in Laurel Hill Cemetery in Philadelphia) and Joseph Hart, are buried in Cypress.

General Hart, along with being a war hero, was a successful merchant who owned numerous ships. He was also a land speculator who was a major investor in the purchase of land in what was known as the Connecticut Western Reserve in western Pennsylvania and northeastern Ohio. Hart made his fortune in shipping and land speculation. His only son, Squire Richard Hart, himself a successful merchant, eventually attained a combined wealth of almost a half million dollars, an incredible fortune in those days. Squire Hart’s only son, Richard Jr., died at only 10 years of age, so the fortune was split among Richard’s three daughters. Richard’s stately home was located at the corner of Main Street and the Old Post Road across the street from the Old Saybrook Firehouse. Richard, his wife Elizabeth, Richard Junior and several of the daughters are buried in Cypress.

Elisha Hart and his wife Janette McCurdy eventually moved into Reverend Hart’s house on Main Street and there raised seven “beautiful” daughters who were known by many for many interesting reasons. Daughter Jeannette was quite the social butterfly and was said to have had a “fling” with Simon Bolivar of South America during one of her many travels with her sister Ann. Some suggest that this never happened, however. Daughter Ann was married to Commodore Isaac Hull, commander of the USS Constitution (“Old Ironsides”) and, together with Jeannette, traveled the world during missions of the Constitution (immediately after Hull’s retirement, the US government passed a law prohibiting such family accompaniment on missions). Jeannette and Ann were also known to have an interest in Cypress Cemetery. In order to get permission to bury Leah Lathrop Hart, the Hart family “slave”, in the fenced in Hart family plot in Cypress (photo at right), the sisters purchased the black wrought iron fence that marks the College Street boundary of the cemetery as an enticement to the powers-that-be.  The wrought iron fence around the family plot was installed at the same time. Leah was said to have been buried in the plot, but those cemetery “powers” required that it be without an inscribed marker. A marked grave in the Hart family plot for Leah’s two year old daughter, Fanny, would suggest that Leah is indeed buried there as well.

At about that same time, Jeannette – said to be a converted catholic – decided to hire a stone cutter to inscribe the tombstone of Lady Fenwick, which for the first two hundred years, lay unmarked. Unfortunately, the date of death that she had inscribed was 1648, three years after Lady Alice was said to have passed in 1645. In addition, Jeannette had a cross inscribed on the tombstone which upset many because the cross was more a Catholic symbol than one used by the conservative Congregationalists. Lady Alice Fenwick was a Congregationalist.

With the exception of Ann Hart Hull and Joseph Hart, all of the Harts mentioned and many more are buried in Cypress Cemetery.