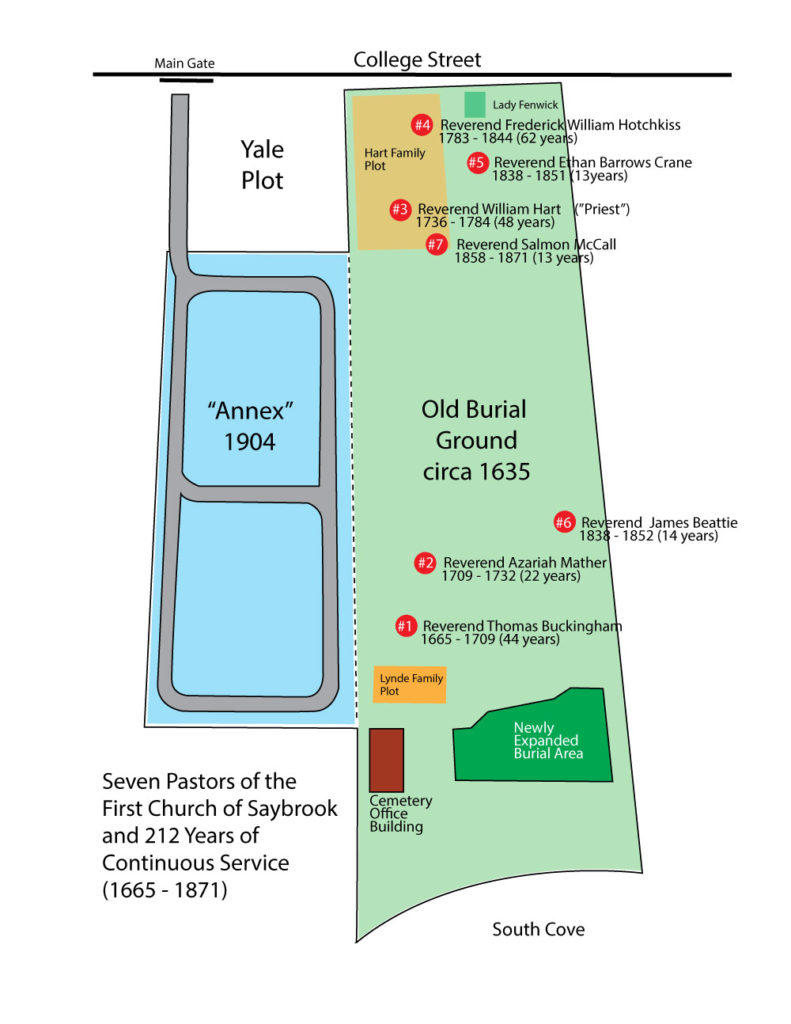 Reverend Azariah Mather, the pastor that was at first a “tutor” at the Saybrook Collegiate School, followed Buckingham and was in the position for the next 22 years.  After Mather graduated from the Collegiate school in 1709, he entered a tutorship in the school and very shortly thereafter replaced the recently deceased pastor Reverend Thomas Buckingham.  By December of that same year, he was hired as pastor of the First Church of Christ in Saybrook.  After his time of service to the community, he was dismissed (“removed by a council”) according to his successor Reverend William Hart.  Mather continued to live in the community in a since-demolished house at the head of Main Street.  He died shortly after his leaving the pulpit in 1736/37 at the age of 52.

Succeeding Mather was Reverend “Priest” William Hart who stayed in the position for the next 48 years.  Priest Hart was the patriarch of the Hart family and father to General William Hart, Samuel Hart and Elisha Hart.  He was said to be one of the “coolest headed”and conservative of all of the conservative “Old Light” clergy.  He was said to have a great distrust of any kind of reformation. After almost 50 years, Priest Hart was replaced by his son-in-law, Reverend Fredric William Hotchkiss who served an amazing 62 years.  In that Hart was infirm toward the end of his life, there were several years of overlap when both Hart and Hotchkiss served together. Reverend Hart died in 1784.

Reverend Hotchkiss was the son-in-law of Reverend Hart, having married Hart’s youngest daughter Amelia. Hotchkiss was fondly remembered walking throughout town visiting his “flock”.  He’d stop by for tea and would be known to say that he’d pass by on his way back to the church and have dinner, which the wives were said to look forward.  Much of the almost 110 years served by Hart and his son-in-law was spent in the third church building which was located on the west side of Main Street where Pennywise Lane intersected.  The location is today a small park located across the street from the present day Congregational Church.

Following this time, a succession of pastors guided the church for shorter durations.  The first post-Hotchkiss pastor was Reverend Ethan Barrows Crane, who spent several years at the side of Hotchkiss before the latter passed away. Reverend Hotchkiss was very fond of Crane and often commented how lucky he was to have a colleague such as Crane.   Reverend Crane was said to be rather small and somewhat frail in stature, and in 1951 he asked to take a long respite for his health, with said respite lasting 6 months. When Crane returned to take up his job again, he instead handed in his resignation.  During the respite, the church temporarily hired Reverend James Beattie who ended up being hired on in 1851 but only stayed until 1853.  It was immediately after Beattie’s pastorate that work began on the fundraising and construction of the church presently used on Main Street. Later in 1853, several pastors were interviewed for the position with the church ultimately hiring Reverend Salmon McCall who spent the next 13 years in the pulpit at Saybrook.  McCall was at the pulpit for the exhumation and reburial of Lady Alice Fenwick and for the funeral of Lieutenant Giles F. Ward, Jr.