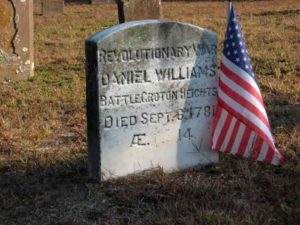 Daniel Williams, who died at the age of 14 in what is known as the Battle of Groton Heights, is one of the more tragic stories in Saybrook’s early history. The Revolutionary War battle occurred on September 6, 1781 at Fort Griswold on the Groton side of the Thames River. Daniel, it is said, had always wanted to see Fort Griswold, and when a neighbor on duty at the fort came home on furlough, Daniel’s father allowed him to take the neighbor’s duty at the fort for a few days. Unfortunately, it was during that early September time that the British attacked the fort. Daniel was said to have been struck down by enemy fire while passing ammunition to the Patriot soldiers.

After the British seized control of the Fort, they set about to kill the remaining Patriots, including the Commanding American officer Colonel Ledyard who was killed by his own sword, or so it was said.  After the killing was done, it was said that eighty five Patriots and forty five British were killed. Prior to sailing away, the British burned both New London and Groton at the mouth of the Thames River.