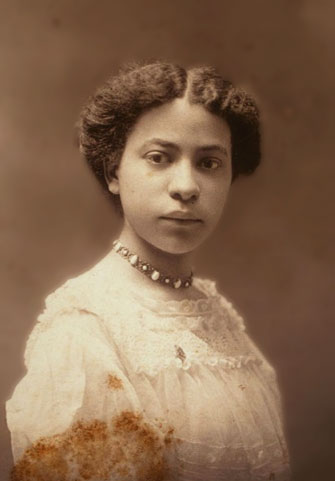 Anna Louise James was born on January 19, 1886, in Hartford. The daughter of a Virginia plantation slave who escaped to Connecticut, she grew up in Old Saybrook. Dedicating her early life to education, Anna became, in 1908, the first African American woman to graduate from the Brooklyn College of Pharmacy in New York. She operated a drugstore in Hartford until 1911, when she went to work for her brother-in-law at his pharmacy, making her the first female African American pharmacist in the state.

The pharmacy where James worked started out as a general store for the Humphrey Pratt Tavern in 1790. The store moved to its current familiar location at the corner of Pennywise Lane at Main Street in 1877, where it became Lane Pharmacy. Peter Lane, one of only two black pharmacists in early Connecticut, added a soda fountain to his establishment in 1896.

When Peter got called away to fight in World War I, he left the pharmacy in the care of his sister-in-law, Anna Louise James. In 1917, Anna took over the operations and renamed her business James Pharmacy. Anna, known to local residents as “Miss James,” operated the business until 1967.

As described by Tedd Levy in an article in the Shoreline Times, “…she was small woman with a soft voice, pulled back hair in a tight bun, and a stern face with deep furrows and rimless glasses. She had all the appearances of a no-nonsense, hard-working, unyielding spinster. But, she was much more. For more than 50 years she was the kindly, caring, trustworthy, and universally cherished Miss James. From her pharmacy on Pennywise Lane in Old Saybrook she dispensed prescriptions to cure illness and sooth the hearts and minds of generations of Saybrook residents and visitors.”

After her retirement, Anna Louise James kept residence in an apartment in the back of the pharmacy until her death in 1977. The store itself remained vacant from 1967 until 1980, when it was renovated and reopened in 1984. Although the building has changed owners numerous times over the years, the former pharmacy, now a Moroccan restaurant and an ice cream shop, retains much of the character James instilled in it. The shop still utilizes some of the original cabinetry, tables, chairs, and marble countertops, as well as a 1940s milkshake machine. 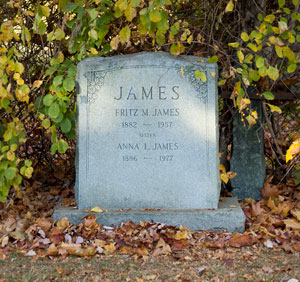 For generations of town’s people she was employer, a sensible and sensitive confidant and adviser. For more than half a century she was the confidant and conscience of the community.

Miss Anna Louise James (1886-1977) gained a place in the history books for her “firsts” but, even before her death in 1977 at 91, she became a lasting legend in the history of her town. Miss James is buried with her brother Fritz in southwestern corner of Cypress Cemetery.

For a more thorough treatment of Anna Louise James, you can purchase her biography – What Did It Take – A True Story – at the Old Saybrook Historical Society in Old Saybrook.