In 1838, Martin Van Buren was the 8th President of the United States, succeeding Andrew Jackson. Being one of Jackson’s closest confidantes, Van Buren was elected Vice President on the Jacksonian ticket in 1832 and was then elected President in 1836. Van Buren spent his entire inaugural address talking about “the American experiment” and what an example it was to the rest of the world. At the time, the economy was robust, but less than 3 months later, that prosperity was gone as a result of the panic of 1837. At that time, the 1837 “bust” followed what had been a cyclical economy, but Van Buren’s predescessor caused some of the difficulties including Jackson’s destruction of the Second Bank of the United States which removed restrictions on inflationary practices of some state banks. Ironically, wild speculation on land and easy credit contributed to the economic downturn as well.

In Connecticut, William W. Ellsworth – a Whig – started his term as the state’s 30th Governor. He was a Yale-educated attorney who served as a three-term United States Congressman, a Justice on the Connecticut Supreme Court, and who twice turned down nomination to the state’s United States Senate seat. Ellsworth is buried in Old North Cemetery in Hartford. 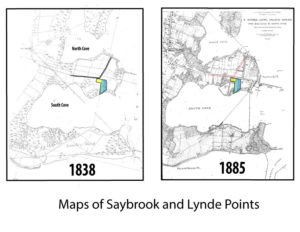 The image at left will allow you to compare the 1838 and 1885 maps.  An interesting difference can be seen in the angle of College Street as it passes from west to east in front of the cemetery. Between 1838 and 1885, the “highway” appeared to be diverted slightly south and extended toward the river and past the cemetery. Also note the difference in the angle and location of Cromwell Street as it enters College Street just east of Cypress Cemetery. In 1838, the intersection looks like a sharp curve to the north whereas in 1885, the roadways intersect at a 90 degree angle. The intersection is to the northwest of the cemetery in 1838 and to the east in 1885. The fact that College Street appears to be located further north in the 1838 map would potentially explain why some of the original gravesites, including that of Matthew Griswold, are said to be located under the paved portion of College Street and not within the present boundary of the property.  That area was likely a part of the original “ancient” burial ground.