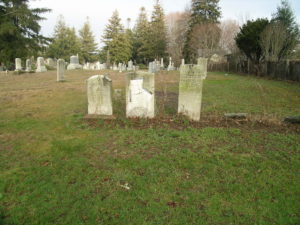 When one thinks of slaves in colonial times, they likely think of southern plantations and cotton fields. They may also think about repressive “masters” that were said to own them. The owning of slaves – or “indentured servants” – was a part of colonial America in New England as well. And the Saybrook colony was no exception.

It is generally thought that New England slaves worked side-by-side with those that owned them, almost as business partners. They learned their owner’s trades becoming shipbuilders, farmers and coopers. Contrary to the slave’s way of life down south, it is said that northern slaves often lived with their owners, eating at the same dinner table. Saybrook resident Captain Elisha Hart and his family owned, among others, a “large, pompous, supertious woman” named Leah who was said to rule the kitchen and was much loved by the Harts. When she died, she was said to be buried in the Cypress family plot of the Harts, although a stone bearing her name – Leah Lathrop Hart – is not present or recognizable.

Much of the evidence of slave ownership and its existence at the very core of Saybrook life comes in the form of the records of what the deceased passed down to his heirs. Amongst the list of “material” goods passed down by Judge Samuel Hart are the references to “negro boy Phillip” or indian servant “Cesta”. This brings up the point that all servants and slaves were not of African American descent. Native Americans also served in what was called these vital roles as well.

The photo above shows three gravestones of slaves that lived in Saybrook toward the end of the 18th and into the 19th century. The gravestones mark the resting places of Frank Ransome (left), Phyllis Jackson (center) and her sister Rose Jackson (right). It is thought that Rose was owned by Squire Richard Hart while Phyllis was owned by Richard’s uncle Samuel Hart. Samuel lived on the corner of Maple Avenue and Main Street while Richard lived on the corner of Main Street and the Old Boston Post Road across from the fire house. On the night that Rose was to die, Phyllis was asked to come to stay with her. When Phyllis came downstairs the following morning, Richard’s wife Elizabeth asked how Rose slept the night. Phyllis is said to have told her that Rose passed away about 9pm the night before, but not wanting to waken anyone, she slept the night beside Rose’s body. Now, Phyllis and Rose sleep together side-by-side in eternity. Rose died on 1856 at the age of 68.

As a note of interest, the graves in the old section are all oriented so that the engraved side of the headstones faces north with the footstones located to the south toward South Cove. In other words, the bodies are buried with their heads oriented to the north toward College Street with the feet toward South Cove. Frank, Phyllis and Rose, on the other hand, appear to be buried the opposite way, at least as indicated by the headstones. The engraved sides of their headstones face South Cove while their footstones are on the College Street side of the headstones. This suggests that the three slaves are buried with their heads to the south, in the opposite orientation of all of the others buried in the old section. Whether this was done because they were slaves can only be speculated upon.  Most old cemeteries have plots oriented with the heads to the east so that they will arise when the sun arises upon the next coming.